Respectus Philologicus
About the Journal

Focus and scope. Respectus Philologicus is a professional, open access double blind peer-reviewed bi-annual international journal that aims to involve scholars from around the world. The journal provides a platform for different theoretical and thematic approaches to the following humanitarian research fields: linguistic research, issues of literary narratives and contexts, the influence of advertising discourse, theory and practice of translation, audiovisual research. As the scientific journal is multidisciplinary with linguistics integrating different disciplines, it promotes cooperation between scholars both in Lithuania and abroad who are interested in different facets of language. Consequently, the journal is of great significance not only on a regional level but also worldwide.

Languages. The journal accepts articles in Lithuanian, English and Polish. 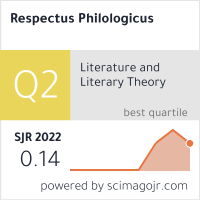 History. The first issue of the scientific journal was published in 1999 as a philological edition of Kaunas Faculty of Humanities (from 01/01/2017 – Kaunas Faculty) of Vilnius University. In 2002 the international editorial board consisting of leading scientists of Lithuania, Latvia, Estonia, Poland, Russia and Belarus was formed. The journal became an international edition of regional character and was published with double numbering 1 (6).

Polish scholars united with the colleagues from Lithuania to support the journal whose interdisciplinary approach and orientation at strengthening the cooperation among scholars of the humanities from different countries had gained acknowledgement in Lithuania, Poland, Russia, Belarus, the USA, Ukraine and Finland. The journal became popular not only locally, but also involved authors from the USA, the Great Britain, Canada, Kazakhstan, and Ukraine. Polish language among Lithuanian, Russian and English became the fourth main language of the journal.

Sponsors. From 2016 to 2019 publication was funded by the European Social Fund project Publication and Coordination of Scientific Periodicals (together with Lithuanian Academy of Science, project code Nr. 09.3.3-ESFA-V-711-01-0004).